Usually,Interseller is used as a tool to help recruiters source top talent, but Diego Segura, a graphic designer and a high school student from Austin had different plans for it. Instead, he used Interseller to curate and reach out to a hyper-targeted list of founders and executives who could help him kickstart his design career. After speaking and meeting with some of the most accomplished members of the design community, Diego is currently working at COLLINS, one of New York’s top design agencies.

Diego recently stopped by the Interseller office to give us the inside scoop into how he used our tool to land one of the most sought-after design internships. 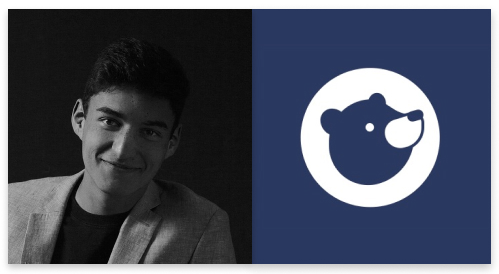 What were you using Interseller for?

Diego: I initially used Interseller to find email addresses of CEOs and marketing executives in Austin to ask them about their career and to sell my graphic design services.

I started with writing cold emails, then cold-calling people. Unfortunately, all I got were countless rejections.

After writing hundreds of emails, I looked at the few that garnered responses. Those were the starting point for my templates on Interseller. I also did some A/B testing to compare email copy performance, which led to much better results. Soon enough, my schedule became booked with dozens of calls each week.

What impact did Interseller have on your career?

Diego: I used Interseller to reach out to a co-founder at a tech company in Austin and was forwarded to their head of marketing. The head of marketing and I kept in touch over the following months, which led me to my first internship with them at the end of my junior year. When I was offered the internship, I decided not to return for my senior year since I wanted to focus on working. I still kept in touch with the people I found through Interseller. More than anything, I learned how to write effective emails, which proved invaluable when I outreached to top design agencies to find a job in New York.

Can you walk us through step-by-step how you did it?

1) I created an advanced search on LinkedIn Sales Navigator to narrow my search for people in Austin with titles such as CEO, CMO, founder/co-founder, etc.

2) Using the Chrome extension, I added people I wanted to contact into Interseller.

3) I then edited and fine-tuned the email copy.

4) After I finalized the email copy for one sequence, I created another version to A/B test that copy and compare performances.

5) When the sequences were ready, I launched them and waited for the replies to roll in.

Diego: My emails were succinct, but eye-catching.

For example, I used the subject line “Diego Segura from Austin,” which implied the person has met me before. Of course they haven’t, but this piques their curiosity to open the email. In fact, this was the subject line of my email to Brian Collins, founder of COLLINS, which eventually led to my job with the agency in New York. 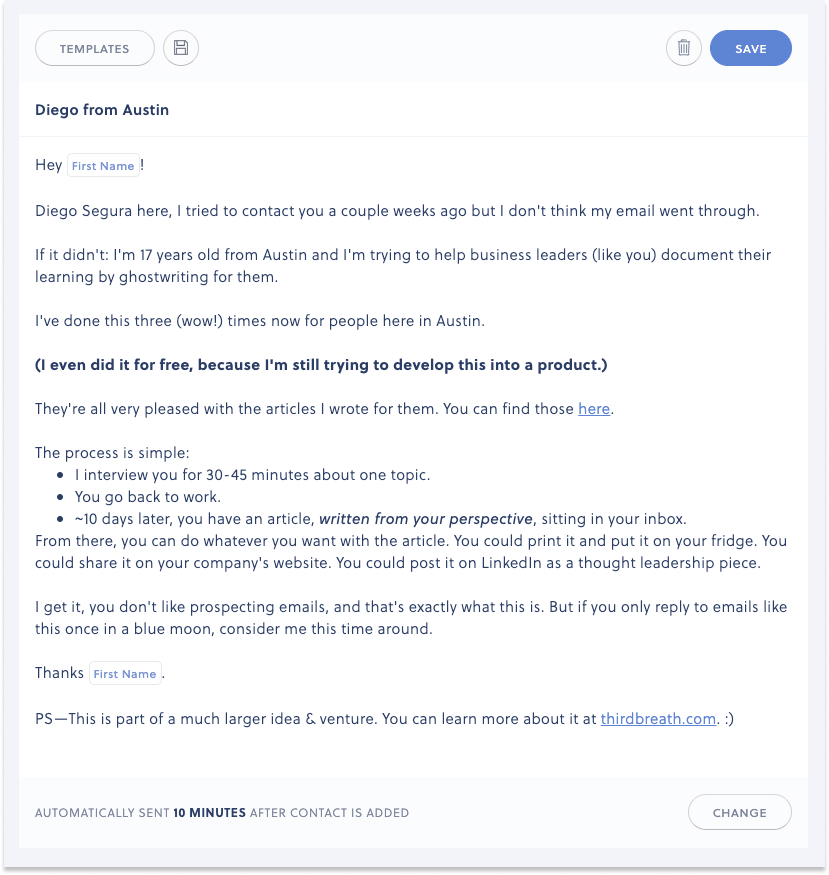 I also learned to end my emails with a clear call-to-action such as a question, request, or resolution. For example, I ended many of my emails with:

When would be a good time for a ten-minute phone call to ask you some questions? If someone reads your email and it’s not clear what you want them to do, they’ll delete it.

My emails were initially formal since I thought I needed to sound professional when reaching out to these executives, but I came across an interesting revelation:

As I moved up the chain, I realized these C-suite executives responded pretty casually. That’s when I switched up my emails to be more casual and they became easier to respond to.

How much personalization did you add to your emails? Do you think that increased your reply rate?

Diego: Of course! I usually included the contact’s first name in the subject line or in the email copy. While this is a minor detail, it helped increase the odds of having my emails opened and read. I also made sure to tweak my emails to be more detailed if they sounded generic.

Choosing the right people definitely helped generate higher open and reply rates, which is why I reached out to people in Austin as a way to personalize my emails.

Since you’ve seen great success from your email sequences, we’d love to hear any tips and insights you have for other users so they can see similar success.

Diego: I recommend reading these books to improve your copywriting:

As far as tips go, here are a few do’s and don’ts:

All it takes is one great email to get them on the hook, or you’ll lose them completely.

Thanks Diego for telling us about your journey with Interseller! If you’re curious about Interseller, you can check out our sitehere.